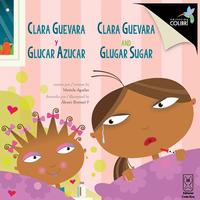 “Ha, ha, ha, ha,” laugh Samantha at the school cafeteria while eating her lunch with her friends.  “That Clara is ALWAYS bringing boring food.  Who would like to go with her on a picnic?  Ha, ha, ha, ha!”

Clara, sitting at the table across from Samantha, couldn’t help but feeling awful and ashamed when she heard that.  Who would have thought that on top of being a nuisance, Glugar could also bring her embarrassment!

“Ha, ha, ha, ha … and I also think Clara is a vampire,” Samantha continued laughing, “I see her checking her ‘sugars’ everyday … eewwww, she’s like a vampire figuring out if she needs more food in her blood stream.”

Clara couldn’t believe what that girl was saying about her, and in front of other kids! No one had ever been so mean to her before!  “Well,” Clara thought, “I do have to check the sugar levels in my blood everyday, but, I’m not a vampire!  And the food I regularly eat now is not bad!”

Tears of shame and sadness came out of Clara’s face when all the kids sitting next to Samantha followed her to the school patio.  “I bet no one will hang out with me now,” Clara mumbled to herself.

“Hey Clara,” said Tom approaching Clara’s table, “why did you let Samantha treat you so badly?”

“Yeah!” Glugar yelled from inside Clara’s body, “I couldn’t believe what that girl said! Such a liar! I didn’t turn you into a vampire!  What a silly idea!”

“Whose that talking?” Tom asked looking around.

“Oh Tom, let’s not make this more complicated than it is now … it’s Glugar Sugar, my diabetes speaking,” Clara said.

“Your what? Well, let’s not talk about that now.  I just want to tell you that you have to do something about that Samantha before she’s nastier to you.  She’s one of the school’s worst bullies you know!” Tom mentioned.

“And, what do you suggest Tom? Any ideas?” Clara asked, happy to find a real friend.

“How about if you just put an ugly toad in her backpack?” cheered Glugar, “or put lemon juice in her milk at lunch?”

“Ha! That would be fun!” said Tom, “that Glugar or whatever of yours sure is funny! However, I think the best thing to do to stop her for once and for all is to talk to our teacher and to your parents about it.”

“I prefer the ugly toad!” yelled Glugar a little upset.

“Me too,” Clara replied, “but that won’t get me anywhere.”

ABOUT ME = ACERCA DE MÍ

I was born and grew up in Costa Rica, and I currently live in the United States. I have loved stories and fantastic worlds since I was a child. I’m now a children’s librarian and storyteller, I live with type 1 diabetes, and I give thanks to God for all his blessings. With this blog I want to share with you my creative work. Enjoy!

Clara Guevara and Glugar Sugar, Clara and Glugar's main story is published by Editorial Costa Rica, and available in the U.S. through Scrawl Books.